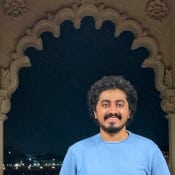 Get to work with some of the smartest minds in AI in the world.

Built the Marketing team from scratch. I lead all of our comms & marketing efforts.
Strategize and execute content marketing initiatives, and everything else that’s needed at a startup.

Part of the leadership and operate across functions to scope out and deliver projects. Also shape our product and business strategy.

Left IIIT in my fourth year and joined this political consultancy. We worked on multiple elections and inside governments. Created communication that reached crores of Indian everyday over many offline and online mediums.

I worked on all verticals of a political campaign, from data and targeting strategies to narrative designing and production, taking up the roles of both leadership and labour.

The company later got acqui-hired.

Under Professor Navjyoti Singh for the course Space, Time and Imaginary Reality.

For the course Introduction to Humanities.

A Global Community Development program for 6 weeks in Cairo through AIESEC. Digitizing and cataloging raw data, Database Management and Branding.
Had the opportunity to experience the Egyptian-Sudanese folk music scene and the industry-at-large.
A rather wholesome experience of the country, its youth and student community.